Hey my fellow slide slanga’s,
Sorry if this is a redundant article. It’s my first post here, and what I genuinely was trying to find an answer to.

Short story: My cup mutes don’t respond on low Ab or G and sometimes Gb/F#. Is there anything to do modification wise to help this?

Long story: years ago in college a buddy of mine had a stoneline cup mutes he was using in trombone choir. I think it was Gordon Jacob something or another. Anyways he was tasked with a Low G (bottom of staff) and it wouldn’t work. And he blamed his mute. I thought ridiculous don’t blame the equipment, even though he’s a very capable player. He then handed me the mute, to which I also couldn’t sound a stable G or Ab...notes around it were fine. Just not those notes. I had a Wick metal cup mute. Mine worked fine. Years later as I have some income I buy a stonelined cup because I didn’t want to be the only guy on the bandstand without that brand cup (dumb I know). But I did, then in the big band we switch some parts around and I get to playing 3rd (actually 4th-strange arranging) of shiny stockings. Notes not working... “ahhh yes the good old ‘stonelined doesn’t play Ab or G’ trick...oh well, I guess those notes aren’t on the gig” lol *shrugs*..this became my understanding of the quirkiness of this mute. I have tried multiple of this kind, and same result.

Fast forward more years, and I’m applying grad school cuz furthering my playing and career is a thing I guess. I’m asked for prescreening and final round to play Casterede Sonatine. Look at the second movement and the end needs a cup mute that goes down to Ab and G... “oh I know that one. I do like the general sound of the stonelined, but you’re not getting me with that old trick”...I proceed to pull out my wick cup mute, and of course the corks are garbage. Whatever, I’ll just recork it I say, it’ll be great I say. And I was right. This mute felt more open and just better sounding than ever...until I got to Ab and G. So I played notes around it. A was sus, Ab a little more sus but I’m a pro I can muscle it..G was absolute dog sh**, and Gb was cow sh**.Bb and F on that partial are fantastic. I will admit, not nearly as bad as my stonelined mutes, so I could muscle a response to those notes, but not at all pleasant to play or hear I imagine.

Enough of my monologue...see short story above. Answers?
Top

Sometimes mutes need to be adjusted either by filing the corks or adding material.
Also, some mutes benefit from a small hole drilled into the end.

My Tom Crown straight wouldn't respond on trigger D & Db, at the suggestion of a section mate, I rolled a piece of paper and inserted into the mute so that it stuck out about 2 inches.
Instant fix!!
Eric Edwards
Professional Instrument Repair
972.795.5784

"If you must choose between two evils, choose the one you haven't tried yet."
"Rather fail with honor than succeed by fraud." -Sophocles
Top

The problem is the volume in the cup "coupling" with the low pitch to reduce resonance in the horn. Venting it with a hole would change that behavior to a different pitch, hopefully one you don't use! Holes can be easily plugged if they're not right, so experimentation is reversible. 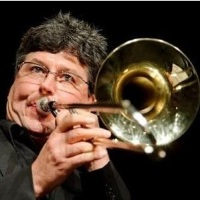 H&B cup mutes definitely need a hole, I don't have experience with others. I usually drill it in the middle of the end but I've seen it drilled in the side just above the cup too. 1/8" isn't quite big enough to have the right effect. 3/16" to 1/4" works well.
Top

Many cups and straights of the size of the H&B have the same problem. My Denis Wick cup tended to have that problem in low D (below the bass staff), a note you don't often have to play on tenor.

Bot the hole modification and the use of an extender (I was told to use a business card rolled up) work great to fix the problem.
Bruce Guttman
Merrimack Valley Philharmonic Orchestra
"Almost Professional"
Top 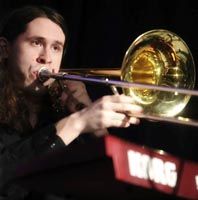 I'd be interested to know if the H&B hole works better in the end or on the side. I think I still have two of them, so I might try one on each and see how they compare.
Top

Here’s mine with a hole drilled on the side…the mod was made about 20 years ago, so I didn’t remember the exact size of the drill bit used. My vernier caliper measured the hole at 1/8 inch.

I drilled mine when I needed those notes for a pit gig. Made all the difference in the world.

I drilled in the side, so now I occasionally feel the air venting across my slide hand. When I do this again, I think I will drill in the end instead of the side.

The jo-ral adjustable cup mute doesn't have these problems. I'm curious why anyone would use a stonelined cup mute outside of a big band. Not being critical, I just don't think they are the right tool for that job.
Top

I've not encountered this problem with my Denis Wick "adjustable" cup mute (to my knowledge). [I think it's better than the Jo-Ral.] I'll have to check it thoroughly.
Top

I've not encountered this problem with my Denis Wick "adjustable" cup mute (to my knowledge). [I think it's better than the Jo-Ral.] I'll have to check it thoroughly.

As I mentioned above, my Wick adjustable cup has problem notes too. Down around D below the bass staff. Not a common note for a tenor player. I'm sure the JoRal has the problem as well, but I never tested mine to find the exact note. Note that there are two JoRal adjustable cups for tenor -- one for small bore and one for large bore. I never found a horn the "small bore" mute fitted. The regular one was much better.
Bruce Guttman
Merrimack Valley Philharmonic Orchestra
"Almost Professional"
Top

Big band is what I mostly do and it's the classic sound. I don't have any need for others.
Top

I prefer the sound of the stonelined. I use the small bass sized one on my 547. I painted it silver so it doesn’t stick out as much, and also drilled a hole in it.
Kris Danielsen D.M.A.

And it's truly all about the sound.

Yep, it's very rare to be using a cup mute outside of a big band to begin with. Stonelined all the way on small bore. There were some concert band pieces we needed cup mutes for that were really more like movie music, and jo-ral or Denis Wick was what our section used on large bores.
Top

I have learned a lot from this thread, especially on distinguishing timbres using the aromatic properties of poop. Has anyone tried drilling more than one hole? That could turn a one holer into a two holer or a three holer, transforming a stone lined cup mute into something worthy of true class distinction.
Richard Smith
Wichita, Kansas
Top
Post Reply
17 posts • Page 1 of 1