History of Bass trombone use in Big Bands

History of Bass trombone use in Big Bands

I'm writing a paper on the history of the bass trombone within big bands. I was wondering if anyone had any ideas for resources to use to find info or any starting points with specific musicians or groups.

Right now I have the books Swing Changes and The History of Jazz that I'm going through. And obviously I'm going to try to follow George Robert's career. There was also a post on the Bass Trombone facebook group a few weeks ago of notable bass trombonists that I'm going to look at. But any other suggestions would be greatly appreciated! Google scholar and databases I get access to through my school haven't been a ton of help.

One important guy to research is Bart Varsalona (I hope I spelled that right). He was bass trombone for Kenton and one of the early adopters of F-attachments.
Bruce Guttman
Merrimack Valley Philharmonic Orchestra
"Almost Professional"
Top

Thanks! I found a really great piece on Bart in the Spring 2001 issue of the ITA journal. If anyone else ever interested in researching him its a good place to start
Top

I'm sure you found:

already: looks like there are some older ITA articles out there, and the article itself is well cited.

Good luck - would love to read your paper!
Top

You may want to research the progression in instrument bore sizes 547 to 562 to the dual bores 562/578. I believe the 547 bores were in orchestras (1940 +/-) and progressed into 1940-1950 big bands.
I know George Roberts switched to bass bone while playing in a touring big band. He soon moved into L.A. studio work. His path is significant in the industries desired use of the instrument.
Best if luck with your paper.
Top

Depending on the depth of research you need to do you might want to check out some books by Kurt Dietrich.

Depending on how much "original" work is required of you, you might want to get some of the PhD theses on George Roberts, plus web articles. The man is well covered and deserves every glowing word. The references and links in these will give you a clear map of what is already covered.

There are some players I think are under-represented in this progression. Alan Raph, for example, was absolutely central to the development of the Duo Gravis bass trombone. Even though Raph got hooked on bass after hearing Roberts on "Joy of Living," Raph never warmed to the way Conn's worked for his own playing. I think you would have to contact him for his story (I found him to be very helpful and outgoing, but was quite glad I was well-prepared to not waste his time.) He is, however, one player who can give you solid big-band and studio reflections on the development of the instrument. He played a King Silver Sonic Symphony (the same horn used by Bart Varsalona) with Larry Elgart, a Conn 72H with Gerry Mulligan, drove the development of the King Duo Gravis, and was involved in (and used) the (King) Benge 290 (he switched back to his Duo Gravis before too long

) He wrote one of the early double-trigger method books, and an unaccomponied solo, among many other things. I don't know of many other trombonists (bass or otherwise) who studied with Nadia Boulanger. His depth of sheer musicianship and musicality made him a favorite of Quincy Jones (check out the "Smackwater Jack" album from way-back-when.)

Bill Hughes is another example. Hughes joined Basie around the time George Roberts made his bass trombone debut with Stan Kenton. About a decade later, after leaving Basie for a while, Hughes was back playing bass trombone rather than tenor. Later still, Hughes took over leadership duties with the band. It would be a very interesting history project to look at the Basie charts by Sammy Nestico and trace who was playing bass in the Basie time at each date of publication.

Even though Sammy was not a bass trombonist, he was a trombonist and arranger who came to understand the bass trombone quite well. So, looking again at the charts for the Airmen of Note and tracing who was on what and when would be historically interesting.

It really does start with Bart Varsalona. He is well covered in the 2001 ITA article (and, like George,he deserves every word... look for examples of his playing with Kai Winding.) It goes on with George Roberts. But there are scores of other great players who barely get mentioned. Each contributed something to big band expectations for sound concept, technique, and musicality.

Consider: even though George Roberts was the quintessential melodic player, there are only handful of actual big band features for him. His great solo albums are pretty much reduced specially voiced groups.

Players like the one for whom Frank Mantooth arranged "A Nightengale Sang in Berkley Square", or for whom Patrick Williams arranged "Saturday Night (is the Loneliest Night of the Week)" deserve places in history. Sure, those arrangements would likely have not existed if Roberts hadn't gone first. But they still deserve their places. (Identity of those players and the player of our OTHER favorite features, is left as an exercise for the reader... what does not kill you makes you stronger

Good luck on picking your topic and completing your project!
Top

Paying attention to the sound a lot has happened.

What I notice recently, speaking especially of LA, bass has become comparable in size soundwise to the rest of the trombone section. Big band now has four horn sections. I'm not in favor of this, but it is what it is.

Bill Holman left bass out of his early bands because they made the sound "muddy". Now he is expected to have them. Not all of his player have blended with the section. The current young fellow has followed the path of Rich Bullock with a huge honkin non-blending sound.

In the swing era, someone played 3 or 4, but it still sounded like a trombone. The Kenton section had a sound. It was not four tenors and a honkin bass. The Kai Winding bone bands had guys who played together.

Things have changed. My read is the audience has also changed, so that the sound no longer computes. That's pretty unhappy.
Top

The only album I see with two bass trombones listed is Autumn; I'm not sure if that means there were two bass trombone parts or if it means there was one part with different guys playing on different tracks. There's two tubas listed, too. As for the two bass guitars? I seem to recall that he was using two acoustic basses back then; he eventually switched to a single electric bass. Some of his late albums have just a double bass or both a bass guitar and a double bass.

Odd that you should mention Rich Bullock and Don Ellis together; Rich played with Don Ellis on his last two albums.
Top

Many bass trombonist are important in the big band bass trombone history... In first Bart Varsalona the first real bass trombone in big band with SKenton... George Roberts was the king and he have the most beautiful sound ever... After him like 4 years after his debut coming out Kenny Shroyer another big... (both in LA scene) also in LA Barrett O'hara, Russ Brown, Rosa... Ernie Tack are one of the best too and after those Phil Teele and then Bill Reichenbach and more guys after... In NY scene coming out in first Tommy Mitchell, Dick Lieb, Dick Hixson and then the greatests Paul Faulise and Tony Studd... Then Dave Taylor, George Flynn and more... Benny Powell was the first on Basie band on 50's band then Bill Hughes until the last original C. Basie band... Ellington had only Chuck Connors on bass. Kenton also had a lot of bass trombonists like Bill Smiley, Bobby Knight, Dave Wheeler, and some more like Doug Purviance in the 70's... Mel Lewis had Doug and Earl McIntyre... Some bands like Terry Gibbs don't have the bass just 3 tenors...Cliff Heather with Thad Jones, in Europe Erik Van lear was the main with Kenny Clarke Francy Boland and Peter Herzbolleiner had his own big band... In NY also Jack Jeffers was a call bass bone... Rich Bullock in LA also
Top

I find it interesting that both Bart Varsalona and Alan Raph, two of the prominent bass trombonist pioneers, were playing the King 1480 Symphony Bass:

flotrb wrote: ↑
Thu Jun 24, 2021 10:50 am
I find it interesting that both Bart Varsalona and Alan Raph, two of the prominent bass trombonist pioneers, were playing the King 1480 Symphony Bass

They weren't the only ones. Pete Lofthouse (Lawrence Welk 1953-1965) played on a 1480, though in some clips he's playing a Reynolds double. If memory serves, Ernie Tack also spent some time on a King, though he's more closely identified with Olds (mostly due to appearing in Olds advertising in the 1970's).
Top 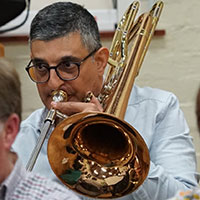 Stumpy Brown, who played in his brother’s big band.

Dr. Denson Paul Pollard wrote his dissertation on this topic. That (and especially its bibliography) would be a great resource.
Kris Danielsen D.M.A.