I really like James Markey's recording of Brahms' Cello Sonata #1, Opus 38. I would like to order the piece and get to work on it. It would be easy to assume that he is performing Ralph Sauer's edition (Cherry Classics Music) of the piece. However, I would not be surprised if Markey just grabbed one of the popular cello editions like the Verlag Urtext or the Rose edition published by International Music.

Has anyone worked on this piece? If yes, which edition/publisher do you have and what insight can you share about that particular edition? Thanks in advance for your thoughts.
Brian D. Hinkley - Player, Teacher, Technician and Trombone Enthusiast
Top

I'm pretty sure he's playing off the actual cello version. I think the Sauer edition came out shortly after Jim's recording, but I could be wrong on that. Ralph's version edits out some of the a tougher "un-trombonistic" passages, but Jim plays them, and makes them work.

I played the 1st mvt. on a recital some years ago - great music! Markey's rendition is outstanding, and is humbling for any trombonist who wants to tackle the piece. One of my colleagues from work borrowed my CD and his string player wife was completely knocked out by Markey's performance. He makes a case for performing the piece on trombone, but most of us have some serious "shedding" ahead for us to approach the quality of what he laid down on that recording. 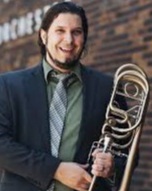 Yeah- I'm sure that Jim Markey has nothing against Ralph Sauer or his edition of the piece, but I don't see him using anything besides the cello edition of the Brahms. There really are very few double-stops that you'd have to figure out how to handle (Mr. Markey mostly just arpeggiates them really quickly), and he makes the technical stuff sound like no sweat. That truly is a remarkable recording.
-Stefan Stolarchuk
Top

Thanks guys! If Ralph Sauer edited some stuff out, I would like to see what he changed. I might just order one of the original cello editions and Sauer's edition.

Markey's performance is fantastic. I'm sure that I will only take a couple of minutes of playing the Brahms before I am saying "how did Markey make that sound so easy?"
Brian D. Hinkley - Player, Teacher, Technician and Trombone Enthusiast
Top

There's a very nice, clean version of the Brahms Op. 38 Cello Sonata, edited by Orfeo Mandozzi (but not for trombone), available for a very reasonable (optional) annual subscription price on IMSLP:
https://imslp.org/wiki/Cello_Sonata_No. ... _Johannes)

A little difficult to read - because of the wide range the trombone part repeatedly shifts from bass to tenor clef. Range appears to span more than 3 octaves, from Low C (below the Bass Clef staff) to High E (above the Tenor Clef staff), and includes some nice 2-octave jumps! Ignoring a few double-stops, this should be a piece of cake for a bass trombonist, right?

I'd love to have the facility and musicality to play this half as well as James Markey:

If you want to get a cello edition I'm not sure what a trombone player will get by getting some cello edition other than the first edition that is already PD on IMSLP.

Some are traditionally ignored anyway.
Excerpt from one of many Cello forum discussions about this sort of thing...

So, during practice today, I pulled out the music for the Brahms e minor sonata and noticed that the 8th notes on the 2nd beat of the 3rd bar have dots on them. Same thing for bar 5. I have always played these phrases legato, and I'm pretty sure everyony else I've heard play this piece also plays without these marked separations. I tried it a couple times the way it's written and was not convinced it sounded anything but odd, though that could be due to the fact that I'm used to hearing it played completely legato. Any thoughts?

You are right that those note are rarely articulated, by anyone. I've always made a half-hearted effort to do so, but it does tend to impede the flow of the line

The Rose edition for International has long dashes instead of dots. Does that mean he means they should be played portato? Does anyone have his 1982 recording with Pommier? How did he play them?

Who cares? Rose's editions were all just reprints of Felix Salmond's editing. What matters is what Brahms wrote. Get yourself a Henle or Wiener Urtext edition. Brahms wrote dots, underneath a slur, which means that we should do something to bring those notes out of a legato execution.

I came across that in the Urtext edition. The articulations and bowings are sometimes shockingly different than the International/Rose edition most of us are so used to. The Urtext has really been growing on me.

I'm working out of the Henle edition, but I have the International and Peters editions as well. The Peters edition is quite different, with those notes having lines and being on seperate bows.

The interpretation and audible result of of common articulation marks like staccato dots, tenuto lines and slurs will often be very different from what we wind players would have done.

I'm not enough of a cello player to play a Brahms Sonata but of the cello music I have tried on my trombone I quickly realize the whole thing needs to be rethought for the trombone. I presume that is the major contribution of a "Trombone" edition, rather than editing out double stops.
>>Robert Holmén<<

Those comments by the cello players sound like the same discussions that trombone players have. I don't really think that bow markings are going make or break a trombone player's success in playing this piece. We make performance choices every day. My approach is...... 1. Does it sound good? 2. It it appropriate for the music and/or phrase being performed. 3. Does it work with the other musician(s). In this case, does it work with the piano part.

I plan to listen to numerous trombone and cello performance recordings while working on this. The subtleties in articulation get worked out as a person studies a piece more and more. We usually hear someone else doing a particular phrase a way that pleases our ear and we choose to imitate that particular approach for that particular phrase. It's a process that I really enjoy.
Brian D. Hinkley - Player, Teacher, Technician and Trombone Enthusiast
Top

This is interesting. It's obviously not new... It's 150 years old... but in my sheltered life I've never seen this before.

Instead of meticulously notating a dotted quarter that crosses the bar line with a quarter tied to an eighth, he just puts the quarter on one side and the dot on the other.

It makes sense and it's graphically cleaner but i've never seen it before.
>>Robert Holmén<<

I played the piece on one of my MM recitals back in '88. I played off the cello part. Not a lot of edits/changes needed. Works well on bass trombone. Heard Eric Carlson play it on tenor at an ITF in '82.
Harold Van Schaik
Bass Trombone
The Florida Orchestra
S.E. Shires Artist
Top

Thanks everyone. I think I am just going to get the Leonard Rose edition and Sauer's trombone edition. The Rose edition appears to be based on Felix Salmond's interpretation, which was a cello favorite for a few generations, so there is some tradition there. I'm sure that when I get it, the edition probably will not be a very important matter for a trombone player......but it has been fun looking into this.

Glad to hear that it was performed by Carlson on tenor trombone. I see it as a great piece for a tenor trombonist who has a solid low register. Might be a good fit for me!

BassBoneFL wrote: ↑Wed Mar 17, 2021 7:10 am I played the piece on one of my MM recitals back in '88. I played off the cello part. Not a lot of edits/changes needed. Works well on bass trombone. Heard Eric Carlson play it on tenor at an ITF in '82.

I was there -- that was my introduction to the piece; Eric played it beautifully. 20 or so years later, when I played part of it in a tuba lesson, my teacher said wow, what a great piece; mind if I steal it?

Has anyone tried performing the Brahms clarinet sonata in E-flat? That's another great one -- and from Brahms's late period -- that works well on trombone. When played by someone better than me, that is...

Just noticed this thread. Why did you pay to buy two different (likely very similar) editions of this piece that is already for free on IMSLP?

I didn't actually check, but I'm pretty certain you can get a scan of the original score as it exited from Brahms' head there. Plus any number of reprints and clean looking editions from before 1900.

BassBoneFL wrote: ↑Wed Mar 17, 2021 7:10 am I played the piece on one of my MM recitals back in '88. I played off the cello part. Not a lot of edits/changes needed. Works well on bass trombone. Heard Eric Carlson play it on tenor at an ITF in '82.

Has anyone tried performing the Brahms clarinet sonata in E-flat? That's another great one -- and from Brahms's late period -- that works well on trombone. When played by someone better than me, that is...


I did that one too.... works well IMO
Harold Van Schaik
Bass Trombone
The Florida Orchestra
S.E. Shires Artist
Top

urbie5 wrote: ↑Sat Oct 30, 2021 6:30 am
Has anyone tried performing the Brahms clarinet sonata in E-flat? That's another great one -- and from Brahms's late period -- that works well on trombone. When played by someone better than me, that is...

Did you record it? Would love to hear it.

The other piece I've been working on forever, but will never perform, is the Franck violin sonata. The 'rents had an old 10" LP by Isaac Stern, and after listening a few times and finding it weird, the piece started to grow on me, and by the time I got to college, I was on it. I'm not a soloist, but for a top-notch player, it would be a fantastic piece for 'bone. There is a guy from the NHK Symphony who recorded it -- I don't really care for the way he plays it, but it can be done, at least.