Question about tuning an old King with low-pitch tuning slide

Question about tuning an old King with low-pitch tuning slide

I recently picked up on the cheap what I believed from the online ad to be a pretty nice, straight-looking King Model 2 or 3 from about 1912-1913 based on the serial number. I didn't hold out much hope that the slide would be worth anything, but much to my surprise, what I received ended up being a very nice, clean, intact King Model 2 (their "solo" model at the time), with a slide upon receipt around a 6.5 to 7/10. After a thorough bath, a quick polish, some fresh slide cream and time working with the horn, it's around an 8/10, and I'm confident I can get that to an 8.5/10 or maybe better in a few more weeks working in the cream. It's a little slow, so I know it wouldn't be everyone's cup of tea, but for anyone who cut their teeth on public school rentals/beaters, it's definitely in the good to very good range in comparison. Certainly nothing I need to worry about sending out for an immediate slide job like I was expecting, at any rate.

On a hunch, I compared the King with the normal tuning slide to one of my more modern horns. And, as I'm sure you've likely guessed by now, I discovered the King was significantly shorter, maybe about 2 inches shorter overall, about 4-5 inches in total tube length. So I swapped in the low-pitch slide, quickly zeroed in on Bb, and Bob's your uncle, I was in business.

But it got me thinking, and researching. If I could only reach Bb with the optional low-pitch tuning slide, what would the horn have normally been tuned to when using the standard tuning slide? I couldn't find any answers at the HN White website.

Did they tune to something other than Bb? B seems reasonable but oh so very weird. C might be possible, but if I remember correctly, I had about 2 inches of inward travel remaining once I zeroed in on B, and I don't think I could quite make it reach C (but I didn't specifically try this out, either).

Or (and I suspect this is the case) did they tune the fundamental as a Bb, but use something other than A=440 equal temperament? I know of several tuning frequencies popular in the 19th century where A was less than 440, but would they have used something low enough to drop an A by between a half- and a whole-step, to where what I hear as a B or a flattened C would be considered a Bb? Were such tunings that common in the US prior to WWI?

To round out the options as I see them, did they perhaps use a combination of the above: tune to C, but with A=<440 tuning? That seems unlikely, as King C trombones from just a decade or so later were clearly advertised as such, and I can't really see the earlier models ever being considered anything other that Bb horns.

Anyway, if anybody has some insight into my little 100 year old riddle, please let me know! It seems likely than a tuning other than A=440 is the key here, I just don't know what it might be. So specifically, if King had a particular tuning frequency they used as a baseline for their standard tuning slide, which I suppose must have been the norm for the industry at the time as a whole, that's what I'd really like to learn. I suspect I'll likely have to make a couple of recordings of some simple tunes in the various tunings available, just to be able to hear and compare the audible differences in a back-to-back playback. 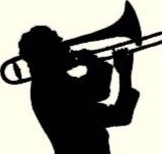 I wondered about that as well. The horn came with a mouthpiece, but it wasn't original. It's unlabeled, but feels and measures about the same as a Bach 7C in terms of cup and shank, although the exterior contours are quite difference. At any rate, I tried with the Bach 7C, a 6 1/2AL, a Schilke 47B, and this unlabeled mp. All tuned just about identically. I don't know anything about leadpipes, however.
Top

There was a "high pitch" and "low pitch" for brass about 100 years ago.

At the time this instrument was made, there were two common pitch standards in the US: Low Pitch at about A-435 Hz (just a tad below modern) and High Pitch at about A=452 Hz. In modern tuning the High Pitch trombone sounds almost as if it's in B.

High Pitch disappeared during the early 1920s in the US and held on in the British Brass Bands until nearly 1970.

I have two King trombones from the era you describe. One is High Pitch and one is Low Pitch. I can't play the High Pitch slide because it is missing the water key. Some times I'll take the Low Pitch slide with the High Pitch bell section and I can get to a slightly higher standard pitch (around A=442 or so) which is similar to where most orchestras tune.

Note that the mouthpiece for this instrument had a smaller than normal shank and was much shorter. I can use a normal small shank mouthpiece with it, but it's a little long and hence tends to make the instrument play a tad flat.

My issue with this model is the double brace under the mouthpiece. This is the patent referred to on the cork barrel. It may make the inner slide more rigid, but it make the thing pretty uncomfortable to hold.

Thanks Bruce, I think that's exactly what I was looking for.

I can't say I've really noticed the double brace at all while playing, positively or negatively. But then, I've only played maybe 10 hours total on it since I got it, and then only for about 45 minutes at the most at a sitting. So far I'm enjoying this old King, at least for dinkering around on my own at home. My office is still working remotely, so I generally pick it up for half hour or so when I need a break from the laptop around lunch time. I still like my '39 2B better overall, though, which probably isn't exactly shocking.

That's interesting about the shorter original mouthpieces. I may have to shop around for a reasonably priced King M21 to try with this horn.

M21 is still a standard shank mouthpiece. Look for some real antiques. The ones I have generally only have a number on them if anything. Although I do have a Conn Innes that is small shank to use with my Holton Paul Whiteman.
Bruce Guttman
Merrimack Valley Philharmonic Orchestra
"Almost Professional"
Top

Ah, I see. Good advice, thanks! Mouthpieces are definitely one of those things I never really bothered with 20 years ago, I found what seemed to work and just ran with whatever it was. I think I bought more mouthpieces in my first 2 months returning to trombone than I did in the entirety of the 10-ish years I played regularly back in the day. So much to learn!
Top
Post Reply
8 posts • Page 1 of 1